Cartridge 7 x 57 mm Mauser
Caliber 7x57mm Mauser
Action gas-operated, rotating bolt
Rate of fire 750 - 1400 rounds/min depending on variant
Muzzle velocity 710 m/s (2300 ft/s)
Effective range 200 m to 550 m sight marks
Maximum range 900m (984 yd)
Feed system 8 round box,
10 round box,
20 round box,
30 round drum,
100 round drum
Sights Iron sights or Scope
The Mondragón was the world's first automatic rifle and was designed by General Manuel Mondragón. He began work in 1882 and patented the weapon in 1887. It was gas-operated with a cylinder and piston arrangement, now very familiar but unusual at the time, and rotating bolt, locked by lugs in helical grooves in the receiver; it was also possible to operate it as a simple straight-pull bolt action. The caliber was 7 mm (.284 in) Mauser with an 8-round box magazine; a trial LMG version had a 20-round box and provision for a bipod, like the BAR; the Mexican Army also used a 100-round drum magazine for a light machine gun variant produced in 1910. It was known for its extreme accuracy and stopping power but suffered from high recoil when fired on its fully automatic setting. The Mondragón was so accurate that the German Army added a scope to it and used it in single shot mode as a sniper rifle during World War II. The Mondragón also had a light machine variant that when used with its 100-round magazine had similar fire power to the MG-42 but with far more portability and much less recoil. For this reason the Mexican army used an improved light machine gun variant of the Mondragón up until 1943 when it was replaced with the Mendoza M-1943 general purpose infantry machine gun.

Because of the Mexican Revolution, few facilities in Mexico were able to mass-produce it and those that could were not able to shut down their assembly plants for the required retooling time needed to initiate production of the new rifles. Mondragón attempted to interest a U.S. firm, without success as they thought that automatic rifles were not practical and could not be produced in the numbers that Mexico wanted . He then turned to Schweizerische Industrie Gesellschaft (SIG), of Neuhausen am Rheinfall, who agreed to manufacture the rifle. In 1901 the first rifles were shipped to Mexico and issued to the army as the Fusil Mondragón Modelo 1900 with an 8 round magazine. In 1908 During the Mexican revolution a completely Mexican manufactured version was again issued to the Mexican Army as the Fusil Porfirio Diaz Sistema Mondragón Modelo 1908 this time with the 20 round magazine. By 1910 however adequate facilities were completed in the Mexican cities of Veracruz, Ciudad Juárez, Guanajuato, and Mexico City where they were produced until 1921.

With World War I, Germany bought the remainder of SIG's stock that had not been sent to Mexico, issuing them to the infantry, where they proved highly susceptible to mud and dirt in the trenches (a problem familiar even to less complex bolt action rifles such as the Ross and Kar 98). Instead, realizing ther potential as portible yet powerful auto rifle they were withdrawn by the Central German command and reissued, with 30-round helical magazines, to aircraft crews as the Fliegerselbstlader Karabiner 1915 (Flier's Selfloading Carbine model 1915), until sufficient numbers of machine guns were available. Although they did not function well in the thick moist mud and dirt of central Europe they proved to work well in hot and arid climates such as the north of Mexico meaning that the Mondragón did not have a problem with dirt getting in it but, more of a problem with moisture as it would still work well when it would get dry sand and dust in it mechanism, although the Mexican manufactured 1908 model fixed his problem with slight improvements to the firing mechanism and the barrel.

In the early 1930s the Mexican government decided that they could make a profit trying to market the weapon on the international stage. At the time the Mondragón was still considered a quite advanced weapon with its only true rival being the BAR which weighed more and had far less accuracy. It was sold to many Mexican allied nations including Chile, Brazil, Peru and Nationalist China. The Weimar Republic of Germany and later Nazi Germany purchased rights to licence manufacture the weapon along with Austria and Japan. Japan however manufactured less than five thousand, as Japanese machining technologies at the time were not advanced enough to mass produce the delicate firing mechanism. When Mao Zedong's People's Liberation Army declared victory over nationalist forces in 1949 many of the nationalist's weapons were seized by the communist forces and almost all of the Chinese Mondragón rifles were redistributed to the People's Liberation Army where they remained in active service as sniper rifles and support weapons up until the late 1980s although a small number of them still remain in service with auxiliary Peoples Liberation Army Reserve Force units.

During World War II there were still many of the Mexican rifles in German stocks left over from World War I. These were given as auxiliary weapons to the Waffen SS or sometimes as replacements or complementary weapons to the Kar 98k in the early parts of the war. During the siege of Stalingrad some Wehrmacht troops used them instead of the Kar 98k as they were less susceptible to the frigid climate, and during the later part of the war they were issued to many Volkssturm groups. They also found their way into France when they were given as a donation by the Third Reich to the German allied Vichy French army, many would later be captured and used by the French resistance. Few of the German versions with the helical magazine survive, however the Mexican army still uses the Mexican version in parades and other military celebrations as a ceremonial rifle.[1]

This page was last modified on 14 August 2009 at 10:05. Text is available under the Creative Commons Attribution-ShareAlike License; additional terms may apply. See Terms of Use for details. 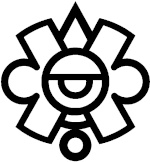 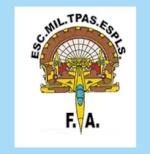 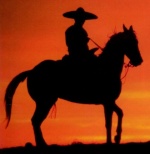 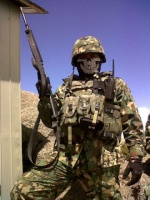 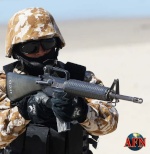 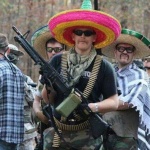 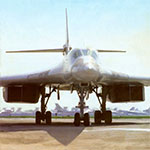 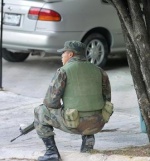 And the Mexico Mondragon Bayonet


Here is a nice example of a 7x57mm semi automatic Mexican Mondragon Rifle. Designed by Mexico Colonel Manuel Mondragon and made under contract by SIG Neuhausen in Switzerland. The Mexican Army adopted it as the Fusil Porfiro Diaz, Systema Mondragon, M1908. SIG Neuhausen produced 4000 of the Model 1908 rifles for Mexico, but only the first 400 in 1911 were ever delivered.
The rifles were in service with Mexico until the late 1920s. It is said that the infamous Poncho Villa was killed in a hailstorm of 7mm bullets fired from Mondragon rifles in 1923. As for the remaining rifles in Switzerland. The Germans bought them from the Swiss in 1914 and issued them to Infantry during WWI. The actions clogged up easily and the rifles were withdrawn from service. Then issued to aviation units to arm aircraft and reportedly used it to arm observation balloons. Then withdrawn again and scrapped. A Mondragon, serial number 1270 from the Hoffman collection was offered for sale in 1999 by Old Town Station Ltd. in Lenexa, KS. It sold for $8500. I found the rifle pictured here listed for sale on Gunbroker Auctions in April of 2005. The seller (also by the auction user name of Mondragon) was kind enough to let me use the pictures for this webpage.

And Below is a set of pictures of the Mexican Mondragon Bayonet. The Mondragon was issued with an unusual combination bayonet entrenching tool with a semi-circular scoop type blade. Bayonet is marked MADERA HIERRO & pommel has R in circle & another unknown symbol in circle. Hilt is marked REPUBLICA MEXICANA. Note HIERRO translates to Iron and Madera is a town in Mexico, so this bayonet was probably made with Madera Steel and or was made in Madera Mexico.