After Sri Lanka declared victory over the Tamil Tigers in 2009, the army took control of farms and houses left empty by Tamils who had fled the violence.

The military says its mission in northern Jaffna is to prevent "hardline rebel sympathisers" from returning from abroad.

But rights groups say the "militarisation" of Tamil areas means thousands of people who fled the war still cannot return. 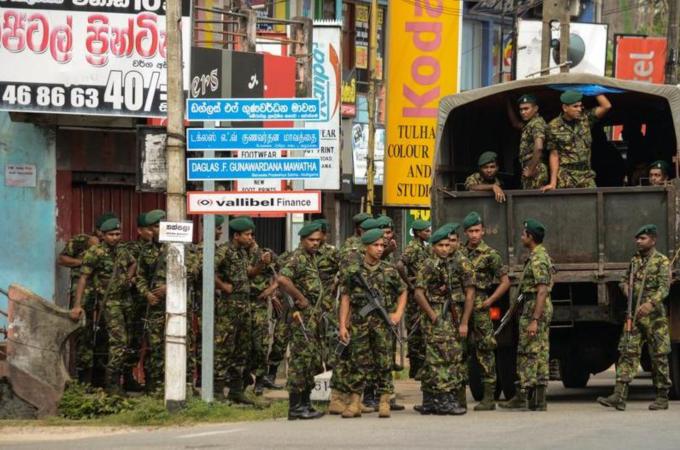 A Buddhist leader and fierce critic of hardliners blamed for attacks on Muslims, is in hospital after reportedly being abducted, stripped naked, and beaten.

Watareka Vijitha Thero, the leader of the Jathika Bala Sena who opposes the actions of Sinhala Buddhist hardliners Bodu Bala Sena (BBS), was abducted and assaulted in the outskirts of capital Colombo on Wednesday night.

Thero was found by a roadside in Panadura town. He was stripped naked, and his arms and legs were tied. His robe and wallet were found nearby. Shehan Kapuge, a local resident, said he had been told the the monk was thrown from a vehicle on Thursday morning.

The monk was taken to the National Hospital in Colombo. Dr Prasad Ariyawansha, the hospital's deputy director, told Al Jazeera: "The monk has suffered numerous cuts in his body and has experienced severe bruising."

Thero has been a strong critic of the BBS and has on several occasions been attacked by the group.

He was most recently verbally abused by the BBS general secretary, Galagoda Aththe Gnanasara, in front of media.

BBS has denied any involvement in the assault.

"This is just another step taken by opponents of the BBS to malign us. I can guarantee that our organisation has nothing to do with this attack," said Dilanthe Withanage, an executive committee member of the BBS.

The attack was believed to have been carried by members of BBS, which has denied responsibility.

Ajith Rohana, a police spokesman, said on Thursday that the police were investigating but have not arrested any suspects.
Source:
Al Jazeera

LTTE: Sri Lanka’s Scapegoat for its Own Terror

LTTE: Sri Lanka’s Scapegoat for its Own Terror

The theory that Sri Lanka is a recruiting ground for Islamic militants targeting India has gained traction again with the recent arrests of two Sri Lankans in India and Malaysia in connection with an alleged plot to attack U.S. and Israeli consulates in southern India. But this situation has another fallout: it upsets the Sri Lankan government’s playbook that the sole perpetrator of international crime on Sri Lankan soil today is the remnant of the Tamil rebel group, the Liberation Tigers of Tamil Eelam (LTTE).

Colombo’s most recent version of this narrative is the claim that the LTTE is regrouping in Sri Lanka with the aid of the Tamil diaspora to resume terrorist activity on the island. To this end, the government recently arrested activists, killed others claiming they were LTTE members, and then banned 16 organizations and 424 individuals active in the Tamil diaspora, citing UN resolution 1373 that prohibits international financing of terrorism.

One reason the Sri Lankan government is raising the revival of the LTTE as an armed anti-state force receiving international assistance is simple: it feeds into the international counterterrorism narrative. Allowing Sri Lanka to play victim of such terrorism absolves itself of its own inaction if not outright compliance with exporting terrorism.

Armed combat in Sri Lanka’s 30-year civil war came to an end in May 2009 with military defeat of the LTTE. Still unresolved however are the deep-seated political roots of conflict between the Sinhalese and Tamils, into which the Muslims too were drawn. In the years since 2009, Tamil resistance has assumed a different form: a non-violent struggle within Sri Lanka that also draws on the increasing activism of the Tamil diaspora.

As the Tamil diaspora continued to highlight the violence and abuse faced by Tamils in Sri Lanka, Colombo realized it needed a new brand of counterterrorism narrative. Urgency set in as the international community began to call for an international investigation into allegations of war crimes perpetrated by the Sri Lankan military and LTTE rebels in the final months of the war.

During Sri Lanka’s civil war, Malaysia was used by the LTTE for arms procurement, intelligence gathering and trade. Ties between Malaysia and Sri Lanka in cracking down on the LTTE go back a long time. To highlight an example, this collaboration led to Selvarasa Pathmanathan (KP), the arms procurer for the LTTE, who was captured in a sting operation in August 2009 by the Malaysian police and then extradited to Sri Lanka.

After 2009, Kuala Lumpur realized a crackdown on Tamil refugees was needed for several reasons. One was the active native Indian population in Malaysia (which has a sizable and vocal Tamil component), which was becoming increasingly assertive and demanding better treatment in the Malay-dominated country. Others were the rise of Professor P. Ramasamy, a Malaysian Tamil, as deputy chief minister of the country’s Penang State, and growing Tamil refugee problems in the country. Kuala Lumpur began to see the benefit of Sri Lanka’s new counterterrorism policies.

On May 15, Malaysia announced it had arrested three Tamils designated as refugees by the United Nations High Commissioner for Refugees (UNHCR) in Kuala Lumpur and claimed they were members of the LTTE. Their evidence: they had LTTE propaganda materials on them. The refugees were promptly deported to Sri Lanka without so much as an inquiry.

Both Human Rights Watch (HRW) and UNHCR castigated the Malaysian government for agreeing to the deportation. “Malaysia seemed more interested in burnishing its ties with Sri Lanka than honouring its obligation to protect refugees from possible persecution and torture,” said Phil Robertson, HRW’s Asia deputy director.

Despite Sri Lanka’s obsession with the LTTE as the sole perpetrator of international crime on Sri Lankan soil in the past five years, instances have emerged where Sri Lanka has been identified as a hub for international crime in Asia. One example is human trafficking. With violence by the Sri Lanka military against Tamils still an issue, large numbers of them pay money to be transported by ship to safe havens – mostly in East Asia, but also in Australia and Canada. When Australia cracked down on would-be Tamil asylum seekers reaching its shores, the Sri Lanka government was quick to denounce the LTTE of organizing these activities. Sri Lanka conveniently forgot to mention the involvement of persons connected with the government in the racket.

In November of last year, the Australian media reported that Sri Lankan navy personnel were arrested for human trafficking. The report said a key player was Sri Lankan Navy’s Lieutenant Commander Sanjeeva Annatugoda. This was preceded by a more explosive report in the Australian media in January 2013 when The Australian reported without revealing names that someone “high profile and… known to be close to President Mahinda Rajapaksa” was involved in the smuggling ring. The Australian government later denied the report.

Another international crime facing Sri Lanka is its alleged role as the recruiting ground for Islamic militants targeting India. Not only have Sakir Hussain and Mohammad Hossaini, the two Sri Lankans arrested, admitted they were recruited in Sri Lanka but that it was done by an ISI (Pakistan’s intelligence agency) operative working in Pakistan’s embassy in Colombo. In September 2012, the Tamil Nadu police arrested an Indian national, Dameem Anzari, for gathering sensitive data on Indian defense installations. His ‘handler,’ Ameer Subbiah Siddique, described as in charge of ISI’s Tamil Nadu unit, was working out of Pakistan’s mission in Colombo.

“The apparent strategy being followed by... ISI was to rope in Muslims from Sri Lanka for executing their plans to give credibility to the deniability factor that it was not involved in any way,” said an India NDTV report on Hussein’s arrest.

As much as Sri Lanka has concealed its involvement in trafficking, the government tries to dismiss the rise of radical Islam in Sri Lanka. Beginning in the 1990s, it was fuelled by ultra-conservative Wahabism and allegedly financed by Saudi Arabia. The Sri Lanka military used radicalized Muslims who were formed into a paramilitary force known as ‘home guards’ to terrorize Tamil villages and gather intelligence in its counterinsurgency strategy against Tamil rebels. The radicalization continues in the east of Sri Lanka and provides the environment in which the ISI has allegedly recruited its operatives.

In light of these trends, evidence is mounting that Sri Lanka is becoming a hub for international crime: human trafficking and personnel recruitment for carrying out attacks in neighbouring countries. Ironically, these activities appear to be happening in areas where the writ of the government runs and with the awareness of the political and military elite.

Sri Lanka is but one of several countries with poor governance, human rights and accountability records that have hijacked the counterterrorism narrative for its own deplorable benefit: to hide its own crimes. If the United States and the international community are serious when they talk tackling international terrorism, they have to separate the chaff from the wheat – those who find counterterrorism a convenient label to mask its own sins, from others who genuinely support this policy and strive to fight terrorism.

J.S. Tissainayagam is a Sri Lankan journalist now based in Washington, D.C. He was a Nieman Fellow at Harvard Univeristy from 2010-2011.

Sri Lanka arrests eight over riots
The suspects are the first to be held on suspicion of sparking attacks on Muslim-owned businesses.
Last updated: 28 Jun 2014 07:00

Police said a total of eight people directly linked to the June 15 anti-Muslim riots were arrested this week and that they recovered gems and jewellery looted from two shops that were targeted during the violence.

"With the help of CCTV footage and the recently established (police) intelligence network we arrested the suspects along with the stolen goods", senior superintendent Athula Weerasinghe said on Saturday.

The violence, which erupted in the coastal resort of Alutgama, spilled over into the neighbouring international tourist resorts of Beruwala and Bentota.

Weerasinghe said jewellery worth more than $11,500 was recovered.

Officials estimate the riot damage at 200 million rupees. Four people were killed and 80 wounded in what were the worst religious riots in recent decades.

Sri Lanka's media as well as rights groups have accused the police of failing to prevent Buddhist mobs from attacking Muslims, who constitute 10 percent of the country's 20 million population.

Police, however, said investigations showed there was a strong criminal element that fuelled religious tensions. Earlier, police had arrested 55 suspects including both Buddhists as well as Muslims, but the eight arrested this week are the first to be held for looting and directly involved in attacking shops.

The announcement of the latest arrests came as the Muslim Council of Sri Lanka (MCSL), an umbrella group of 48 Muslim organisations, petitioned police chief N K Illangakoon expressing fears of more violence against their minority community during the holy fasting month of Ramadan.

"We are concerned that the root causes to the problems related to the attacks on the Muslim community and other minorities has not been addressed and appropriate action taken to enforce justice", the MCSL said.

MCSL president N M Ameen told the AFP news agency they would mark Ramadan in a low key fashion because of the fear of more hate attacks.

Muslims as well as a majority of moderate Buddhists have pressed for action against the Buddhist Force, or BBS, group which is seen as enjoying patronage of senior government figures.

In earlier reports on Friday, Buddhist activists accused of involvement in communal violence said that accounts of their group's members on social media site Facebook had been blocked.

"My account is blocked," Buddhist Force spokesman Dilantha Vithanage told Reuters by telephone. "I can't access my account. I last visited my account on June 25 and the accounts of others have also been blocked."

A Facebook spokesman in London declined to comment on any action taken by the company in Sri Lanka and referred Reuters to its terms of service.