Rafael Mendoza, an employee of the Mexican National Arms Company, designed this light machine gun between circa 1928 and 1933. After military trials, his design was officially approved for service with Mexican armed forces in 1934 as Fusil Ametrellador Systema Mendoza C-1934, chambered for the contemporary standard 7x57 Mauser ammunition. Later on, Mendoza improved his design several times, with the ultimate model being the RM-2, which was produced shortly after World War 2 and chambered for the .30-06 US (7.62x63) ammunition, which was adopted as the new standard by the Mexican army during the late 1940s. This weapon was rather light and dispensed with a quick-detachable barrel; thus, in theory, it was a serious competitor to the American BAR M1918 automatic rifle, although it never saw any significant use outside Mexico.

The Mendoza C-1934 light machine gun is a gas operated, air cooled weapon with a quick-detachable barrel. It uses a long-stroke gas system with a cup-shaped gas piston, located below the barrel. A manual gas regulator is provided on the front of the gas block. The barrel locking system uses a rotary bolt with eight radial lugs which lock into recesses cut into the receiver. Firing is from an open bolt, and the gun is capable of both semi- and automatic fire, selectable through a manual switch located on the left side of receiver, above the trigger guard. One unusual aspect of the Mendoza design is that it has a separate firing pin with similar points at both ends. The idea was that in case of firing pin breakage the operator could disassemble the gun and install the firing pin rearwards, thus resuming operation of the weapon.
The feed was from box magazines, inserted vertically from the top. The magazine housing was offset slightly to the right from the weapon axis to clear the centerline for the sights.
The gun is fitted into a single-piece rifle type stock, made of wood, with a separate pistol grip. The weapon is provided with a hinged shoulder rest and a folding bipod attached to the gas block. 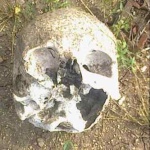